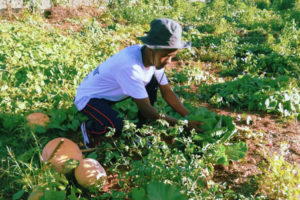 Siyabonga is a Media Practices Student at Boston Media House, specializing in Television which includes photography, editing and filming to name a few. This ambitious young man is driven and has a great passion for all things media and as it turns out, a great passion for farming!

“At Boston Media House, students have access to the latest, state of the art media equipment. Just last year they upgraded all their filming equipment. It was amazing! Not only do students receive excellent tuition but they have access to resources that just amplifies the learning process”, says Siyabonga. The media industry is highly competitive and requires a lot of dedication and passion in order to succeed. Often people are discouraged as they don’t actually realize what a media role involves. Boston Media House simplifies processes and makes it easy for students. “The media industry is not as easy as people think it is, and if people are serious about getting involved in media, then studying through Boston is beneficial- I didn’t realize this until I started studying my Diploma at Boston Media House. Yes, you may know what it takes and you might have an idea of what you might need in order to become a photographer, radio presenter or a film-maker but it’s impossible to learn on your own.  Boston Media House really makes it easy for you”.

Siyabonga has recently discovered his newest passion; agriculture, where he cultivates his own spinach and sweet potatoes. “I am so against GMO produce”. Genetically modified foods are by in large the only types of fruit and vegetable options available in most grocery stores says Siyabonga, who instead of complaining has decided to create a solution by growing his very own organic produce and shares it with his fellow students and family members. Siyabonga then goes on to express that student life at Boston Media House is very enriching, you never feel limited as a person, there is always more for you no matter what you study.  When asked how he expresses himself as a student at Boston Media House he said “expressing yourself is effortless, you shine at whatever it is you do, you can be yourself and express yourself in any way”. Boston Media house has created an environment that encourages individuality and as a result the students at Boston become confident individuals and have the ability to explore options that they never even imagined. One of the best aspects of his studying journey with Boston is the fact that he was able to experience many different media modules and from there, he was able to explore the modules that he was most interested in, which happened to be television. Making decisions regarding which course to specialise in can be tricky, but when students have already learnt a portion of each module, the decision-making process is simpler.

There aren’t many colleges that provide students with all round student support, it’s clear that Siyabonga has had a very positive learning experience at Boston Media House. “I even got assistance with my network and internet connection, since I’ve started studying with Boston it has been a great experience for me”. With such a positive mindset and ambition, Siyabonga is destined for greatness.