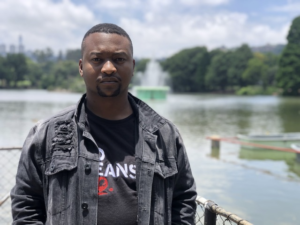 My name is Sabelo “Lethu” Hlatshwayo. I was a proud student of Boston Media House, Sandton Campus from 2011-2013. Boston offered me an opportunity to study in a field that I was most passionate about. Growing up, I was always interested in studying Media. After graduating High School, Boston Media House was an obvious choice.

At Boston Media House, I did a myriad of subjects. However, my passion was more veered toward Sound Engineering and Radio. As a result, I ended up majoring in the Radio industry.

After graduating from Boston Media House, I was ready to take on the world. I started my journey at SABC Henley Facilities as an intern Sound Engineer, then received a freelance contract shortly afterward.

Though being in the studio was a great experience, I soon ventured into different spheres of the Media/Entertainment industry, I then went from Sound Engineer to Assistant Producer, and with the aid and motivation of my colleagues, I was on the right track, producing content for SABC Sport. I then delved deeper into content and got an opportunity to work at SABC’s Content Hub and learned a great deal. I started off digitizing, then became a production assistant, after which I then became a Post-Production Coordinator and soon enough, a Producer. At the end of my journey at the SABC, I was a Video Editor while still freelancing.

I had the privilege of working with different people who taught me a great deal; in my years, I have worked on various other projects as both an Insert Producer and an Assistant Producer, Camera Assistant, Transcriber, Insert Director, Co-Director, and Editor, to name a few. However, I am on a journey to put storytelling at the helm and use television as a canvas to communicate to the masses. I am currently working as a Creative Director and Content Director/Producer, I have worked on my passion projects and collaborated with another company to shoot, produce and direct a reality TV show, a doccie reality series, amongst others, and together we have had clients such as MTN under our belt. I continue to grow in my field of choice and aim to direct commercials after this. I believe in being fluid when it comes to freelancing in the media industry, and I can undoubtedly say, to feed my curiosity and passion, I learn every day, without fail.